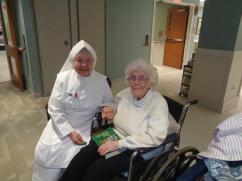 Carmel Richmond Healthcare & Rehabilitation Center (“Carmel Richmond”) could be considered a continuation of the work started by the Carmelite Sisters in Arrochar, Staten Island, in 1938, at St. Joseph’s Home located on Lily Pond Avenue. On August 17, 1938, Mother M. Colette, with six other Sisters, was assigned to open this new foundation, which was placed under the protection of St. Joseph. This home was a four-story building, and had  accommodations for thirty-six Residents. The Sisters continued to provide care for the elderly until 1955, when capital improvements became necessary but the cost prohibitive. It also appeared to be only a matter of time before the home would be torn down due to the construction of the Verrazano Bridge. In February of 1955, St. Joseph’s Home was sold. As early as 1964 the Archdiocese of New York, jointly with the Carmelite Sisters, initiated plans for the construction of a home for the aged on property owned by the Archdiocese on Old Town Road, Staten Island. Various representatives of Catholic Charities of the Archdiocese of New York worked on the project throughout the years. Mother M. Bernadette de Lourdes represented the Carmelite Sisters and lent her expertise to the planning group since the project’s inception.

In carrying out our services to the elderly, Carmel Richmond has always sought to extend the healing ministry of Christ to those entrusted to our care. Besides meeting the physical, emotional, and social needs of our residents, every effort is made to provide for their spiritual needs as well, regardless of religious affiliation. Through the Pastoral Care Department, arrangements are made for the celebration of daily Mass, the Sacrament of the Anointing of the Sick, and the Sacrament of Reconciliation. The Sisters, dedicated lay staff, and Eucharistic Ministers bring Holy Communion to those requesting the same and unable to attend Mass. Prayers are also offered at the bedside of the sick and dying, and emotional support is given to families experiencing the loss or sickness of a loved one.